Researched and prepared by Ruth Magnusson Davis
Theme: Partiality to any person or nation is not of God.
Short RMD appendix: What is the new covenant with Israel?

So began John Rogers’ introduction to the Table of Principal Matters in the 1537 Matthew Bible. The Table was a concordance at the front of the book. It set out bible topics in alphabetical order with short statements of doctrine. Bible verses were cited for further study. This Principal Matters Series proceeds in order, giving the most interesting topics. It also sets out the cited bible verses in full, taken from the Matthew Bible.

Under this topic, Rogers reviews the bible verses which show that partiality is always wrong and is not of God.

Rogers took two verses at the end of this entry from the apocryphal book Ecclesiasticus. This book is also known as the “Wisdom of Jesus the Son of Sirach,” or just “Sirach.” The apocryphal books of the Matthew Bible were sometimes very different from later versions – in length, content, and message – so in places I had to improvise the verse numbering.

I added a separate discussion at the end relevant to the question, what is the new covenant with Israel? This is to supplement Rogers’ points about partiality toward Israel or the Jews. He likely could not have anticipated how widespread such partiality would be in our century. But it is interesting to consider how this makes his study all the more relevant for today.

From the 1537 Matthew Bible: Acception

(1) Acception of persons is to have respect to the estate of the person or to his nation, which thing is not of God.

Deuteronomy 10:16-19 Circumcise therefore the foreskin of your hearts, and be no longer stiff-necked. For the Lord your God, he is God of gods and Lord of lords, a great God, a mighty and a terrible, who regards no man’s person nor takes gifts, but does right to the fatherless and widow, and loves the stranger, to give him food and raiment. Love, therefore, the stranger. For you were strangers yourselves in the land of Egypt.

2 Chronicles 19:7 Let the fear of the Lord be with you, and take heed and do it. For there is no unrighteousness in the Lord our God, nor regarding of persons, nor taking of rewards.

Romans 2:10-11, 28-29  He will reward every person according to his deeds; that is to say, praise, honour, and immortality to those who continue in doing good and seek eternal life;  but to those who are rebellious and reject the truth, and follow iniquity, will come indignation and wrath – tribulation and anguish upon the soul of every person who does evil: of the Jew first, and also of the Gentile. To everyone who does good will come praise, honour, and peace: to the Jew first, and also to the Gentile. For there is no partiality with God. …

Ephesians 6:8 And remember, whatever good thing anyone does, that he will receive back again from the Lord, whether he be bond or free.

Colossians 3:9-11 Do not lie to one another. Put off the old man with his works and put on the new, which is renewed in knowledge after the image of him who made him – where there is neither Gentile nor Jew, circumcision nor uncircumcision, barbarian or Scythian, bond or free: but Christ is all in all things.

Acts 10:34-35 Then Peter opened his mouth and said, Of a truth I perceive that God is not partial, but among all peoples, whoever fears him and works righteousness is accepted with him.

(2) And the same thing [partiality] also ought not to be in man.

James 2:1-4 Brethren, have not the faith of our Lord Jesus Christ, the Lord of glory, in respect of persons. If there comes into your company a man with a golden ring and in goodly apparel, and there comes in also a poor man in wretched clothing,  and you have a respect to him who wears the fine clothing, and say to him, Sit here in a good place, but say to the poor, Stand there, or, Sit here by my footstool, are you not partial among yourselves, and have judged after evil thoughts?

Jude 1:5 My intent is therefore to remind you, since you already know this, that the Lord (after he had delivered the people out of Egypt) destroyed those who afterward did not believe.

Ecclesiasticus 20:22 There are some who destroy their own soul with shame, and for the sake of an unwise person, he destroys it. And with acception of persons, he will undo himself.

Ecclesiasticus 42:1 Be partial to no person, which is to offend.

What is the new covenant with Israel?

But still, many think they are taking the Bible literally and properly when they hold that God will exalt the nation of Israel and give the Jewish people a special place and earthly kingdom in the future. However, if the statements of the apostles and the prophets are made to agree with each other, the only hope we can stand on is the single promise of salvation by faith in Christ Jesus to all, both Jew and Gentile, without any partiality. This promise is of a place in the heavenly kingdom and the new Jerusalem, not any earthly kingdom. The hope of an earthly kingdom is the hope of Judaism, not Christianity. It is sobering to reflect that an earthly kingdom was the hope of the Jews and Pharisees who crucified Christ. But Jesus said to Pilate, “My kingdom is not of this world. If my kingdom were of this world, then my servants would surely fight so that I would not be delivered to the Jews. But now my kingdom is not from here.” (John 18:36)

Two objections may be raised:

(1) The promises to the nation of Israel in the Old Testament were often expressed to be “forever.”

However, in the 1537 Matthew Bible, John Rogers addressed this issue several times in his notes on the books of Moses. He pointed out that in Hebrew, the word translated “forever” only means a long season; that is, a time without an appointed end. It does not mean a time without any end. The word “forever” (or just “ever”) usually translates the Hebrew o-lawm. In a note on Exodus 15:18, Rogers explained that the concept of a time without any end was indicated through repetition in the Hebrew, translated in English as “ever and always” or “ever and ever.” The repetition apparently indicated a genuine “forever.”

(2) The Jews had a preferred place and special promises under the Old Testament, which promises have yet to be realized.

Paul explained that all things happened to the Jews only for an example, for us to learn from (1 Corinthians 10:6, 11). The whole thrust of much of his teaching was to show that the old covenant with Israel has been abrogated for its unprofitableness and the Jews will have no special place now. They are sinners just as we are, and in need of the same salvation under the same covenant. He wrote about the limited, former preferment of the Jews as follows:

Romans 3:1-4, 9-10, 22-23 What preferment, then, has the Jew? Or what advantage from circumcision?  Surely very much. The word of God was committed first to them. What, then, if some of them did not believe? Does their unbelief make the promise of God without effect? God forbid. Let God be true and all men liars, as it is written: That you may be justified in your words, and should overcome when you are judged…. For we have already established that both Jews and Gentiles are all under sin, as it is written: There is none righteous, no, not one…. Without doubt, the righteousness which is good before God comes by the faith of Jesus Christ, to all and upon all who believe. There is no difference. For all have sinned and fall short of the glory of God.

There is no difference! This Paul laboured to show and teach. The word of God was first given to the Jews, but now, under the new covenant, all nations are given it, and all have received the promise of the circumcision of the heart by the Holy Spirit. There is no yet-to-be-revealed partiality, as it were, for ethnic or national Israel.

Much more could be said, but in conclusion, the answer to the question, what is the new covenant with Israel? is not to be found in answers that show favour to Israel or to the Jews. That would be ethnocentric; that is, it would be acception or partiality. Indeed, Martin Luther charged the Jews with ethnocentric partiality – for which, ironically, he has been accused of antisemitism. But as William Tyndale once wrote, Antichrist turneth the roots of the tree upward. (See my paper defending Luther from charges of antisemitism.)

The true Israel of God is all who truly believe on the Son (Ro. 2:29, Gal. 6:16, etc.) The true believers – regardless of race, colour, or creed, or of nation, tongue, or history, or of estate, position, or office – are all the people of God. And they are his only people, and in fact always have been. The story of Israel’s exodus from Egypt served only for our instruction, and as a type and shadow of the exodus of the people of faith from bondage to Satan in his Egypt, which is this present world. Likewise, the whole institution of the Levitical priesthood served to illustrate, under many different aspects, the salvation that Christ won for his people as the Passover Lamb of God, his role as our great High Priest, and also the priesthood of all believers.

God is not partial.

For a related discussion, see “Seven Foundational Points” in About the Table of Principal Matters. 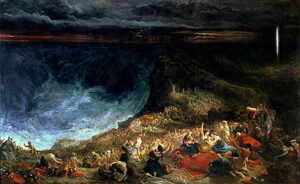 This oil on canvas painting of the Exodus was by Francis Danby in 1825.

Endnote
[1] See the Oxford English Dictionary online under Accepcyon/Acception, entry 2. Only subscribers have access to this dictionary so I havenot linked to it.

KP what is the new covenant with Israel?