So began John Rogers’ introduction to the Table of Principal Matters in the 1537 Matthew Bible. This Table was a concordance set at the front of the book. It set out bible topics in alphabetical order with short statements of doctrine. It also cited bible verses for further study. This series proceeds topic by topic following the order of the Table and sets out the bible verses in full, taken from the Matthew Bible.

(1) One ought to accuse his brother to the church if he does not amend after he has had a brotherly admonition.

(2) No accusation ought to be received against the minister except under two or three witnesses.

1 Timothy 5:19 Against an elder receive no accusation except with two or three witnesses.

(3) We are accused before God by the malice of Satan

Job 1:7-11 And the Lord said to Satan, From whence do you come? Satan answered the Lord and said, I have gone about the land and walked through it. Then said the Lord to Satan, Have you not considered my servant Job, how he is an innocent and virtuous man, such a one as fears God and eschews evil, and that there is none like him in the land? Satan answered and said to the Lord, Does Job fear God for naught? Have you not preserved him, his house, and all his substance on every side? Have you not blessed the works of his hands? Is not his possession increased in the land? But lay your hand upon him a little – touch once all that he has – and (I hold) he will curse you to your face.

Revelation 12:10 And I heard a loud voice saying, Now in heaven is made salvation, and strength, and the kingdom of our God, and the power of his Christ. For he is cast down who accused our brethren before God day and night.

(4) We are also accused by our own sinfulness.

Jeremiah 2:19 Your own wickedness shall reprove you, and your turning away shall condemn you, so that you may know and understand how evil and hurtful a thing it is that you have forsaken the Lord your God and not feared him, says the Lord God of hosts.

(5) Also by our own conscience.

Romans 2:14-15 For if the Gentiles who have no law do by nature the things contained in the law, then they, having no law, are a law unto themselves. They show the deeds of the law written in their hearts, while their conscience bears witness to them, and also their thoughts, accusing one another or defending…

John 5:45 Do not think that I will accuse you to my Father. There is one who accuses you: even Moses, in whom you trust.

(7) Let us, therefore, accuse ourselves.

Proverbs 18:17 The righteous accuses himself first of all. If his neighbour comes, he will find out the truth about him. 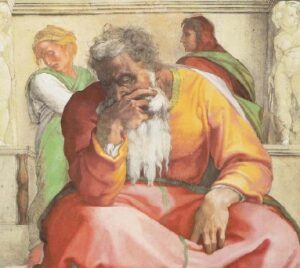 This painting of the prophet Jeremiah is by Michelangelo. Jeremiah is known as the “weeping prophet” for the grief he expressed in his oft rebukes of his apostate people, Israel.

– Previous topics in this series:
Abomination
Acception, or Partiality

What else was changed in our Bible after the Reformation?

Learn more about changes to the original Bible translations of William Tyndale and Myles Coverdale.