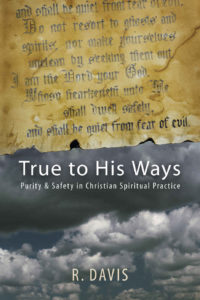 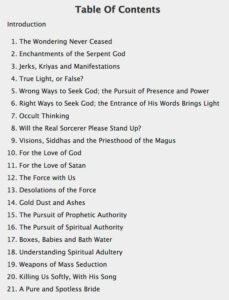 Have you ever asked, Is the Charismatic movement biblical? What’s wrong with the Charismatic movement? Are the strange “manifestations” like uncontrolled laughter or tears or spiritual drunkenness really biblical? What about being slain in the spirit and falling down? Is calling down the Holy Spirit to experience “manifest presence” really how we should seek and find God?

Ruth Magnusson Davis answers these questions clearly and simply in : Purity & Safety in Christian Spiritual Practice. This book is for people who

In times past, the God of Israel set out how His people should seek and commune with Him. And He forbade other ways; in particular, He forbade occult practices. God’s commands for spiritual practice are as important today as they were under the Old Covenant.

Everyone needs to understand the difference between biblical and occult spirituality. However, teaching in this area, if you can find it, is weak and incomplete. This has led to great confusion among Charismatics. Ruth shows that what’s wrong with the Charismatic movement is that its followers have have unwittingly fallen into occult practices that mirror pagan religions, especially kundalini yoga. For example:

True to His Ways looks at Bible teachings on the occult and shows how to distinguish true Christian spirituality from the occult counterfeit. Ruth thoughtfully explores questions such as:

Ruth writes with clarity and with gentleness. She spent years in the Charismatic movement, but left when she realized the problems were serious and she needed to really understand, what’s wrong with the Charismatic movement? When she found the answer, she published her book at her own expense to share her discoveries with others who are also asking.

“True to His Ways gives detailed research comparing many teachings and practices of charismatics to those of the occult. Besides the research presented, it gives her personal experience as well as the experiences of others. The book shows that people should question, according to the Scriptures, the supernatural happenings that people present as being from the Lord. The author has more information on her website, which has the same name as her book, including sample chapters.”

“Upon returning to the church a few years ago, I noticed things had changed. Some branches of the Charismatic world had taken a turn. It almost appeared that certain spiritual focuses bordered on spiritualism (pagan). The more I researched, the more surprised I became. Ruth Davis’ personal experience and deep research has greatly enlightened me, giving me the tools to understand what is happening. Get this book and learn. You may be surprised to find how many Christians (even you and me) can and have come under a subtle deception and may be practicing forms of pagan mysticism in our approach to God. Read, learn and enhance your discernment so that you may stay true to Him.”

“Through this book and the reading of the bible I have been set free from the deception of the occult and extreme charismatic movement. I was tortured mentally and even physically for four years, and this book opened my eyes. It’s written wonderfully and has a thorough description and comparison of the occult, the charismatic, and also eastern practices like yoga. I also love the practical things she had said to go to God the biblical way, as well as many, many, many descriptive first eye accounts from all sides. Its very thorough and very sound and fair.“

“True to His Ways: Purity & Safety in Christian Spiritual Practice by R. Davis is a must-read book. Ms. Davis, a former charismatic follower, has compiled an incredible amount of research on the correlation between the charismatic faith, the occult and eastern religions [including yoga]. She presents a sound apologetic argument for why it is essential for Christians to use biblical objectiveness to test every spirit, rather than a contemplative subjective view of accepting any spirit which “feels” to be of God.

I was impressed with the vast amount of information Ms. Davis researched. Though the entire book, she remained true to The Word of God. Her book is a biblically sound resource, which points out the errors in esoteric faiths. I encourage you to read True to His Ways: Purity & Safety in Christian Spiritual Practice by R. Davis, a Biblical Christian sister. After you finish reading it, be sure to pass it along to someone else.”