Researched and prepared by Ruth Magnusson Davis
Answers the question, What are abuses in the Church?

“As the bees diligently do gather together sweet flowers, to make by natural craft the sweet honey, so have I done with the principal topics contained in the Bible.”

So began John Rogers’ introduction to the Table of Principal Matters in the 1537 Matthew Bible. The Table was a concordance at the front of the book. It set out bible topics in alphabetical order. Under each topic were statements of doctrine and bible verses for further study. This series proceeds topic by topic, following the order of the Table, and sets out the bible verses in full.

Under this topic we see the importance of guarding against abuses in the church. What is meant by “abuses” becomes clear as the study progresses. It includes idolatry, sects, acceptance of fornicators, carelessness for the weak, following the precepts and doctrines of men, etc. Interestingly, we see that separation of church and state was not an ideal of the Reformers: kings and rulers should maintain Christian laws in the land, just as it was in Israel.

In England the king or queen was (and is) the constituted head of the Church of England, a national church. As such, he or she was responsible for the church’s well-being. This accounts for Rogers’ reference to Romans 13:4 under entry (1) below, concerning the rulers as ministers of God to correct abuses in the church — even though, when the apostle Paul wrote this epistle, the Roman rulers were not Christian rulers. Rogers had in mind the rulers of England (and other European countries) in his time. The authority of the British monarch was much stronger in the 16th century than it is now, and the national church occupied a more important and ubiquitous place in the public arena, so Rogers naturally gave responsibility for the church to the ruler under Romans 13:4. Nowadays, however, we in the west tend to apply this verse only to matters of personal or national security, as Paul also did, given the circumstances of his day.

Also, in entry (1) I believe Rogers used the term “church” at least partly in an obsolete way, meaning the whole body of people in a land or community who identify as Christian. In his day, this meant the citizens under the jurisdiction of a professing Christian ruler.

(1) The abuses that are in the church ought to be corrected by the [Christian] rulers.

Romans 13:4 For he is the minister of God for your welfare.

2 Kings 18:3-4 [King Hezekiah] did what pleased the Lord in all things, like David his father. He put away the high altars, broke the images, and cut down the groves. He also utterly broke the brazen serpent that Moses made, because until those days the children of Israel burned sacrifices to it and called it Nehushran.

2 Chronicles 20:32 And [Jehoshaphat king of Judah] walked in the way of Asa his father, and bowed not therefrom, to do that which was pleasing in the sight of the Lord.

[Ed: Verse 33 goes on to say, “However, they did not put down the hill altars, neither did the people yet prepare their hearts unto the God of their fathers.” Rogers was aware of this verse, of course, but it speaks to other issues, such as the danger of falling away and the slippery slope to destruction.]

2 Kings 23:3 And [King Josiah] stood by the pillar and made a covenant before the Lord that they should walk after the Lord, and keep his commandments and his witnesses and his ordinances with all their hearts and all their souls, and make good the words of the said covenant, which were written in the aforesaid book. And all the people consented to the covenant.

(2) The ministers ought to preach against abuses.

1 Corinthians:10-11 I beseech you, brethren, in the name of our Lord Jesus Christ, to all speak one thing, and that there be no dissension among you, but be knit together in one mind and in one purpose. It is reported to me about you, my brethren, by those who are of the house of Chloe, that there is strife among you.

1 Corinthians 5:1, 6-8: There is a report abroad that there is fornication among you, and such fornication as is not once named among the Gentiles: that a man should have his father’s wife… Your complacency is not good. Do you not know that a little leaven sours the whole lump of dough? Purge therefore the old leaven, so that you may be new dough, as you are sweet bread.

1 Corinthians 6:1, 7-8: How dare one of you, having a problem with another, go to law under the unrighteous, and not rather under the saints? … Now therefore there is utterly a failing among you, because you go to law one with another.

1 Corinthians 8:4-12 To speak of meat dedicated to idols: we are sure that an idol is nothing in the world, and that there is no other God but one. And though there be what are called gods, whether in heaven or in earth (as there be gods many and lords many), yet to us there is but one God, who is the Father, of whom are all things, and we in him; and one Lord Jesus Christ, by whom are all things, and we by him. But not everyone has knowledge. For some still suppose that an idol really is something, and eat a thing as offered to the idol, and so their consciences, still being weak, are defiled.

Meat does not make us acceptable to God. We are neither the better if we eat nor the worse if we do not. But take heed that your liberty does not cause the weak to fall. For if someone sees you who have knowledge sitting at food in the idol’s temple, might not the conscience of him who is weak be emboldened to eat those things that are offered to the idol? And so through your knowledge shall the weak brother perish, for whom Christ died. When you sin so against the brethren, and wound their weak consciences, you sin against Christ.

1 Corinthians 11:20-21, 22, 26-30 When you come together, a person cannot eat the Lord’s Supper, because everyone begins ahead to eat his own supper. And one is hungry, and another is drunk… In this I do not praise you… as often as you eat this bread and drink this cup, you show the Lord’s death till he comes.  Therefore whosoever eats of this bread or drinks of this cup unworthily, shall be guilty of the body and blood of the Lord. Let a person therefore examine himself, and thus let him eat of the bread and drink of the cup. For he who eats or drinks unworthily, eats and drinks his own damnation, because he does not discern the Lord’s body. For this reason many are weak and sick among you, and many sleep.

(3) Any manner of mere precepts of men are abuses.

Matthew 15:1-6 Then scribes and Pharisees from Jerusalem came to Jesus, saying, Why do your disciples transgress the precepts of the elders? For they do not wash their hands when they eat bread.

Isaiah 29:13-14 Thus says the Lord: Since this people draws near me with their mouth and praises me highly with their lips, whereas their heart nevertheless is far from me, and the fear which they owe to me, in that they turn to men’s laws and doctrines. Therefore, I will also show to this people a marvelous, terrible, and great thing – namely this: I will destroy the wisdom of their wise, and the understanding of their learned men shall perish.

Mark 7:3-4 The Pharisees and all the Jews, unless they wash their hands often, will not eat, observing the precepts of the elders. And when they come from the market, unless they wash, they will not eat. And there are many other things that they have taken upon themselves to observe, such as the washing of cups and pitchers, and of copper pots, and of tables. 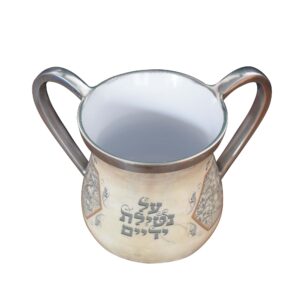 This traditional two-handled style of cup is still used today by the Jews in ritual handwashing ceremonies.