First published c. 1550, Hope of the Faithful is Myles Coverdale’s translation of a German treatise. It sets forth the traditional doctrine of heaven and hell. Coverdale published it to, as he said, refute scholars who deny that there is an eternal life and an eternal damnation. Our edition is a facsimile of the 1846 Parker Society reprint, which was in modern spelling with helpful notes.

Also included is an appendix by Ruth Magnusson Davis showing how, since the Reformation, new Bibles weaken or deny the traditional doctrine. Especially, the scholars of the 1894 Revised Version (RV) used the transliterations “Sheol” and “Hades” to change the meaning of those words and to defeat the traditional doctrine, adding a third intermediate state of the soul.

One of the battles of the Reformation was for the truth that there are only two destinies for a soul after death – heaven or hell. If we die in our sins, our destiny is hell. If we die in Jesus, it is heaven with him. But the teaching of Rome was (and is) that there is a third place, purgatory. Now, in modern times, many Protestants also believe there is a third place where the spirits of the dead go. They believe there is not only hell (which some call Gehenna) and heaven, but also Hades or Sheol, where the departed spirits await the final judgement. This is thanks to the influence of the RV and of James Strong, who was a member of the RV revision committee and published his popular Concordance at about the time the RV came out.

In his Concordance, Strong redefined “Sheol” and “Hades” to defeat the traditional and orthodox meaning “hell,” and gave their meaning as a retreat for departed spirits. This entirely new definition supported the heretical notes of the Revised Version, which, among other things, say that Isaac, David, and the patriarchs are in Sheol/Hades, and not in heaven with God.

A comparison of Bible translations and notes demonstrates how the Matthew Bible upheld the traditional doctrine, but later Bibles, especially modern versions influenced by the RV, have defeated it.

Coverdale would be pleased to see his work brought to light again for the very purpose he first gave it to us: to refute those who would alter doctrine, and, also, to clearly teach the mystery of the eternal life that Christ won for us by his death, resurrection, and ascension into heaven. 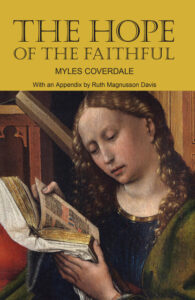