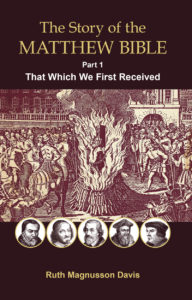 Part 1 is a moving account of the dramatic history of the Matthew Bible, first published in Antwerp in 1537, and the three men who made it: William Tyndale, Myles Coverdale, and John Rogers. Davis describes how the Matthew Bible was brought over to England and successfully licensed for use in the Church, even though the work of William Tyndale had been outlawed in England. She tells the touching stories of Thomas Cranmer and Thomas Cromwell, Henry VIII’s chief ministers, who were responsible for obtaining the king’s authority to license the Matthew Bible for use in the Church.

Davis also investigates conflicting historical accounts concerning the Matthew Bible and the relations of Tyndale, Coverdale, and Rogers. Did the three men work together in Antwerp, or not? The answer is yes, they worked together, and Davis shows how this came to be. She also considers the claim that Coverdale never left English soil, as some historians say, but made his own Bible of 1535 while safely remaining in England. This is not true. He was forced to flee religious persecution in England not once, nor twice, but for three periods of exile. Davis also successfully refutes the claims of Rogers’ biographer J. Chester, that Coverdale was an envious rival of John Rogers. This is also not true. The two men were brothers in faith and fighting for the same cause, an English Bible. It was with a good will that Coverdale allowed Rogers to use half of his Old Testament translation in the Matthew Bible, as well as his Apocryphal translations.

This book will appeal to readers at all levels. Passionate, lively, well-sourced, illustrated, it refers frequently to original (and often little-known) documents, so readers may be sure they are receiving the true history of the Matthew Bible.

When you reach the last page of The Story of the Matthew Bible, you will have a much deeper understanding of the origins and history of the English bible and the men who gave it to us – men who gave their lives in the Reformation, for our sakes, so that we could have the light of God’s word. 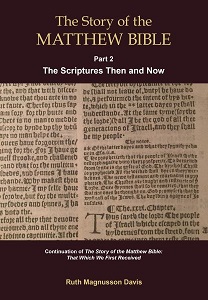 Part 2: Based on fascinating new research, Part 2 of The Story of the Matthew Bible (The Scriptures Then and Now) looks at revisions to the translations of William Tyndale and Myles Coverdale as they were contained in the 1537 Matthew Bible, since that Bible entered the stream of English versions by serving as the base for the Great, Geneva, and King James Bibles. Davis focuses especially on revisions introduced in the Geneva Bible and 1894 Revised Version, and considers their influence on later versions. Over time, many bible verses have significantly changed in meaning; in some cases, they now say the opposite of what they said in the Matthew Bible.

With reference to a variety of 16th-century sources, Davis shows how the Matthew Bible is essentially Lutheran and Anglican in its treatment of matters such as the New Covenant and the church, whereas the Geneva version introduced new teaching and some new translations that advance Calvinistic and Puritan doctrine. A simple comparison of the Matthew and Geneva Bibles clarifies the areas of disagreement. Also, a dramatic review of forgotten history illuminates the role of the Geneva Bible in the Puritan revolution in England.

The book also examines the shift in translation theory between Martin Luther, William Tyndale and Myles Coverdale on the one hand, and the Geneva scholars who revised Tyndale and Coverdale’s translations on the other. Davis makes a complicated subject simple and clear when she shows how the Geneva method of literal translation made the Old Testament more difficult to understand. She also compares the influence of the Septuagint (the Greek Old Testament also called the LXX) in the Matthew Bible and later versions.

Davis challenges modern scholarship insofar as it disesteems the Matthew Bible. With clear examples, she vindicates the translations of William Tyndale and Myles Coverdale. She also shows how learned John Rogers’ commentaries were. By the end, the reader will regret that the Matthew Bible has been lost and forgotten.

This much-needed book is not only a fascinating new bible history, it is a lively review of historical events and personalities, and is a monument to the faithfulness of the Scriptures we first received.

Have a listen here to an informative radio interview Ruth had with Pledge Radio hosts Gene Parker and Cynthia Palmer of Holland, Michigan:

“Having read many books on this subject, I can unequivocally state that this is the best yet. This book isn’t filled with trivia, instead it presents the important details regarding the arrival of the Bible in the English language to our shores. It is a fascinating read, one which highlights the fact that the English Bible was thoroughly and truly inspired by the Holy Spirit, even though circumstances, good and bad, were at play.“

“I found this book gripping. There were parts which I initially thought were going into too much detail, but as I kept reading I saw how vital all the parts were and how they hung and fitted together to make the whole story really exciting. While reading it I became more and more immersed in and able to appreciate the cultural/spiritual atmosphere of that period in the 1500s. My previous studies of Christian history had never given me such a close sense of that atmosphere.”

“I found this book incredibly informative and interesting. I understand the reasons for the Reformation and the history of the bible so much better. It was well-written and very moving.”

“As far as,.. “the heroes who struggled and suffered to produce our seminal English Bible of 1537″… I know that Ruth Magnusson Davis relied heavily upon her own faith to not only produce this fine work of The Story of the Matthew Bible, but also the OUTSTANDING modern spelling and punctuation of the actual original 1537 Matthew Bible New Testament known as The October Testament recruiting involvement from the actual descendants of the martyred saint John Rogers himself. I believe that there is a very special place in heaven for those who God calls upon to provide for His Word to be heard. In the original way that it was meant to be spoken and understood by English speaking peoples, Ruth Magnusson Davis has served the LORD well. This is an OUTSTANDING accompanying book to her modern rendition of a very old Bible that was bought with blood.”

“With “The Story of the Matthew Bible”, Ruth Magnusson Davis has finely crafted an easy-to-read but scholarly-sound tome, detailing the history of what is likely the greatest Bible ever printed in the English language. Having read MANY books on the history of the Bible in English, I can honestly say that Ruth’s stands with the best of them. David Daniell’s hefty textbook gives us an incredibly deep overview of the topic from the Dark Ages through to modern times, and Donald Brake offers concise but current information with hundreds full color photos, but Davis intently focuses on the three men who gave us the Matthew Bible: William Tyndale, Myles Coverdale, and John Rogers, and how their work and contributions still affect us today.

While all three translators are given multiple full, meaty, and well-researched chapters, what I especially enjoyed were the chapters related to Myles Coverdale, a man who has been greatly under-appreciated by modern scholarship. Davis has taken the most modern, updated information available on these men and their works, and given us a solid build-up to their combined magnum opus, the Matthew Bible. The book includes many pictures, as well as useful citations and a full bibliography and topical index. Not only does Davis write factual statements ABOUT the Matthew Bible, she also makes solid arguments with examples on WHY it’s so great.

After my personal experience of buying and reading through a facsimile of the Matthew Bible many years ago, I can honestly state that it is my favorite translation of God’s word. Subsequently, it is a delight that Ruth has come along and written such a terrific book on its history and the martyrs who compiled it. I cannot recommend this book enough. Also, don’t forget to check out Ruth’s own magnum opus, her modernization of the Matthews Bible New Testament (itself just as great achievement as this book).”

“Interesting, well written and well researched. Her writing leaves you wanting more, which hopefully will come soon with the publishing of the second volume. Her website has additional articles clarifying some points about other aspects, i.e. competition with the Geneva Bible, etc. Enjoy!”

“Ruth Magnusson Davis has done real yeoman’s work here in putting together this history. I had the privilege of proofreading an advance copy and found very little to critique. It became clear to me that the author took great care to go back to the original sources such as an early edition of John Foxe’s Acts and Monuments of the Christian Church (not the modern, bowdlerized Foxe’s Book of Martyrs which are typically heavily redacted and condensed) and the writings of William Tyndale, Myles Coverdale, John Rogers, Thomas Cranmer & Thomas Cromwell and other sources of antiquity from the English Reformation period.

For me as a Lutheran, I knew that Luther had played some role in the English Reformation, but only knew so much. Since reading Ruth Magnusson Davis’ book, I now have a fuller understanding. I checked her history of this against Luther’s Works and several histories published by CPH (Concordia) and others and concluded that she has done her homework on the connections between Luther, Barnes, Tyndale & Frith. It was a very satisfying discovery for me.

It also was hard to put down at times. The author clearly has a passion for her topic, she is a traditional Anglican who is fond of Luther and other Reformers.

If you are interested in Reformation history or the history of the English Bible, this is a must-get book to read. It is easy enough to read for the interested layman but also has the citations and detailed bibliography and helps a scholar or seminary student would desire.”

“The Matthew Bible of 1537 was a significant precursor to the later Authorised Version of 1611.

This is a well researched history of the events and persons involved in the publishing of the Matthew Bible that played such an important part in the English Reformation. It features the lives of William Tyndale, Myles Coverdale, John Rogers, Thomas Cranmer and Thomas Cromwell and many other less well known figures. It’s a vivid and passionate account of these heroes, several of whom paid with their lives to bring the Scriptures in the English language to our nation. There are ample quotations from the laws of England, personal letters, other books and especially the Bible.

The author founded the New Matthew Bible Project in 2009, dedicated to generating a lightly updated Matthew Bible for today’s readers.
The New Testament was published in 2016 as “The October Testament”. I have a copy of that too.

“The Story of the Matthew Bible” is actually Part 1 of what will be a two part series. Part 2 is in preparation, and will be added to my wish list.
I thoroughly enjoyed this account which is written in a style that should appeal to both scholars and ordinary readers.”