Transfer of spiritual experience through touch in yoga and Charismatic practice

In kundalini yoga, worshipers invoke or “awaken” an energy or spirit that they call “the force of the serpent,” “kundalini,” or “shakti.” They seek spiritual experiences through this spirit — experiences that they believe purify the soul and help them commune with God. One way they awaken this spirit is by contact with an empowered yoga master, a guru — especially by a touch to the forehead, which touch is called a shaktipat. After a shaktipat, yoga worshipers may fall to the ground and lay there in a meditative state called samadhi.

Since this awakening I have lived in this state where everything that happens is just the pure and natural expression of the will of God which one is in constant awe and gratitude for… It is beyond beautiful. It is cosmic perfection, it is perfect harmony and integration of a magnificent diversity that is beyond all human description. It is all the expression of the will of God and it is our very own Self. And the universe sings the praise of your existence in the eternal light and glory of God.1

People soaking in the spirit at a Charismatic meeting are covered with a blanket for modesty and warmth.

Shaktipat and Samadhi = slaying and soaking in the spirit


Pat is a Hindi word meaning to “transfer” or “descend.” A shakti pat (or, as one word, shaktipat) is a touch, usually on the forehead or crown, which transfers kundalini/shakti power from one person to another, much as happens to Charismatics when they are slain in the spirit. Gurus give shaktipats to bless their disciples, often at meetings held for this purpose, also as Charismatics do. Anyone who has attended a Charismatic church has gone to their “streams” meetings and other gatherings with empowered “pastors” and “prophets” who invoke and guide the coming of a spirit, which they believe is the Holy Spirit, and the various manifestations that follow. See this advertisement from a Hindi guru:

… come to this rare and special evening with Grand Master Choa Kok Sui… we shall request him to give a Shakti Pat to each attendee. One Shakti Pat from him is equal to 20 years of spiritual practice… WOW!… It has been known that when we are in the presence of those who are highly developed spiritually and partake of the Divine energies that they can access and bring down, we have only to make the necessary wishes and, if we are entitled to it, these will manifest. This phenomenon has been observed, particularly, in relation to those who are seeking healing for different aspects of their lives.2

Note the emphasis on healing, also typical among Charismatics at their meetings.

Hindus believe the forehead is spiritually significant, a very special chakra point because it is the “third eye,” or “spiritual eye,” through which men and women can see into the spiritual realm. A shaktipat to the forehead is considered important because it has the potential to open the third eye. One writer makes eerie comparisons of kundalini yoga with Christianity and Judaism:

Shaktipat means “touch of the shakti” or Initiation. Shaktipat is the spiritual initation given by a divine Master; the inner quickening. Shaktipat is synonymous with the baptism of Christianity, and the anointing of Judaism… It represents the beginning of the awakening and unfolding of the inner power of kundalini – shakti, and is often accompanied by marvelous events and perceptions.3

After a shaktipat and during samadhi, practitioners report receiving supernatural peace and love which feels joyful and soul-expanding, just as Charismatics report from slaying and soaking. Following are excerpts from a poem in praise of samadhi, which was apparently “guru-given,” i.e., imparted by a guru:

By deeper, longer, thirsty, guru-given meditation comes this celestial Samadhi… From joy I came, for joy i live, in sacred joy i melt… A tiny bubble of laughter, I am become the Sea of Mirth Itself.4

The references to mystic “waves,” mirth and laughter, parallel the “streams” and “waves” and “spirit-led laughter” that Charismatics speak of.

Following is a description of the samadhi experience from guru Ching Hai:

Samadhi means that you are in ecstasy, in bliss, tranquility and light. You can be in ecstasy while living in this world. There are two kinds of Samadhi: One is after you leave this world, you are forever in ecstasy, in bliss, in the Kingdom of God. You are one with God or the Ocean of Love and Mercy. The other type is a smaller ecstasy that you experience every day through meditation, through devotional longing, or any type of ritual in order to reach ecstasy… When you are in a deeper ecstasy, the whole world disappears, and you only see light and God, and feel peace, bliss and ecstasy.5

Obviously, a person feels like he has met with God in samadhi. So, are Charismatic leaders who impart spiritual “blessings” through their forehead touches no more than gurus under a different name?

The exact parallels cannot be denied

I was shocked and concerned when I learned about shaktipat and samadhi. I have seen Charismatic leaders teach people where to touch others, particularly on the crown and forehead, but also the chest and belly, which are chakra points in Hindu theology. When I was a new Christian, my Charismatic pastors would seat me in a chair and pray, with one hand on my forehead and one on the back of my head, exactly like yoga masters do. And the purpose was the same: to transmit spiritual power. I did not fall down, but others often did. Then they would soak in the spirit just like kundalini practitioners in samadhi.

Interestingly, some Charismatics have altered their practice to avoid touching for transferring the “Spirit.” Others don’t even need to touch a person: they are so empowered, they can invoke spirit by waving an object over a crowd or by prayer, as Todd Bentley and Benny Hinn apparently can do. But it is the same with yogis who are advanced in occult practice. They can also wave objects and knock people down. 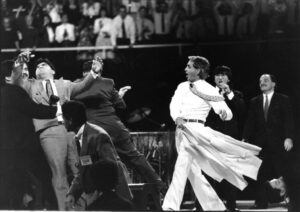 Benny Hinn at a Charismatic meeting knocking people down with a wave of his jacket.

Is it wrong or unfair to compare kundalini yoga and Charismatic practices? Is slain in the spirit biblical, really?


I have been told it is wrong to compare kundalini and Charismatic experiences and that I should not question the work of the Holy Spirit. But that begs the question: is it the Holy Spirit who is at work inCharismatic meetings? it is not wrong to ask if we seek only the truth. Others say that resemblances between pagan and Charismatic practice only show that Satan is copying the work of God. I’ve also been told that Satan manifests at Charismatic meetings sometimes, because he wants to be where God is, and so we have to be alert to try to discern if it is God or Satan who is present. If these people are correct, both God and demons cause jerks, howlings, uncontrollable laughter, etc.

But then we have to ask: If both God and Satan are at work in these manifestations, then how much of each? Can we measure it? Should we be able to measure it so we know when enough is enough? And is it really true that the Holy Spirit and Satan’s unholy spirit manifest at the same time, side by side, during worship and prayer? If so, how can we know the difference? If it is true that we can pass on the Holy Spirit by touch and that Satan counterfeits this by allowing gurus to pass on an unholy spirit the same way — a spirit that also feels loving and soul-expanding — how can we be sure our leaders are of God and not of Satan? Wouldn’t all this be crucial to understand, so we can be sure we don’t receive an unholy spirit? If we cannot judge subjectively by our feelings — because the feelings are obviously the same — how can we judge?

Fortunately, there is an objective test, a standard by which anyone can judge.

Soaking & being slain in the spirit are occult

In the first place, the objective test involves holding our spiritual practices up against the definition of the occult. In the second place, it involves ensuring that our practices follow the ways set forth in the Bible.

If our practices are occult, they are definitely not of God. The occult is Satan’s territory; that is why it is forbidden in the Bible. By measuring the spiritual practices of Charismatics against the objective definition of the occult (see below), we may conclude with certainty that they are occult. We may also conclude that the practices of kundalini yoga are occult. Therefore, it is Satan and his demons who are at work in both yoga and Charismatic spirituality. The ecstasies and manifestations of samadhi and of soaking in the spirit are demonically inspired. They are not of the Holy Spirit.

Below is the short definition of “occult” (one or more aspects may be present):

1) Occult practice includes seeking God or truth beyond nature, reason and the rational mind – that is, in the supernatural realm.

2) Occult practice is based on a belief that communion with God comes through subjective, supernatural experience.

Being slain in the spirit and soaking in the spirit are occult because they involve seeking direct contact with supernatural spirit, and they seek the action, power, presence, enchantments, and influence of supernatural spirit. It’s that simple. They are counterfeits of true, biblical spirituality. Among other things, they lead people away from the life-giving Scriptures, the Word of God and expose people to great danger from Satanic influence and deception.

This shall suffice to illustrate the occult nature of yogic and Charismatic spiritual practices. I discuss the issues in more depth in my book True to His Ways: Purity & Safety in Christian Spiritual Practice. I also discuss the ways and practices of true biblical spirituality. True to His ways is sold in here in our bookstore. It is also available in Kindle format on Amazon.com.

© R Davis, Baruch House publishing, 2008. Adapted from part of the book True to His Ways.

Endnotes (Some website references removed or condensed as I do not want to link to occult websites.):