In their meetings together, Charismatics sometimes call upon the Holy Spirit to manifest, and when the spirit comes (as they believe), they exhibit drunken behavior. The symptoms include staggering, numbness, feeling “under the influence,” and, in more extreme cases, vomiting. They call this state of apparent physical intoxication spiritual drunkenness. It was common in the Pensacola church and, also, the Toronto Airport church, from which came the so-called Toronto Blessing. Spiritual drunkenness now features in the Lakeland Revival, and by impartation it has spread all over the globe. I saw it in my Foursquare church. But, is spiritual drunkenness biblical?

Many people are convinced that spiritual drunkenness indicates the manifest presence of the Holy Spirit of God. The well-known Charismatic author John White wrote, “In meetings where the Holy Spirit’s power is strongly manifest, some people may seem a little drunk.” A little? I have heard giddy Charismatics boast that they are too drunk to drive. 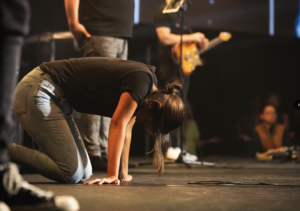 At woman unable to stand at a Charismatic meeting. Her condition is described as manifestation of the Holy Spirit.

The answer to the question, is spiritual drunkenness biblical, is “no.” It is a feature of occult spiritual practice. It is commonly found, with exactly the same symptoms, in occult pagan religions including Sufism, Satanism, and Hindu yoga. The only difference is that Charismatics dress up what they do with Christianese and with references to Christ and to God (as pagans often also do, in fact). They celebrate their experiences as part of a new apostolic reformation. But there is no such thing as biblical or godly spiritual drunkenness. Nor is it a divine experience that Satan mimics in other religions, as Charismatics like to say. It is a demonic experience wherever it occurs (for the reasons explained below). True godly spirituality is sober, gentle, and eminently reasonable, not staggering and drunken. 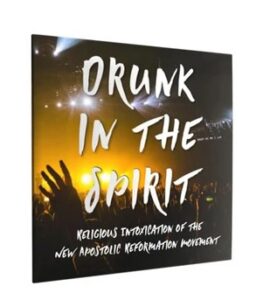 DVD sold as part of the “New Apostolic Reformation” movement and featuring music by the so-called Jesus Culture Worship Band.

Showing is better than telling, so below I compare the words of Charismatics themselves — what they say and do and believe — with the words of practitioners in pagan religions. Charismatics and pagans all believe they have met with God and are communing with Him while they stagger about drunk. They all experience love and joy and feelings of well-being when under the influence of a manifest spirit. They all believe essentially the same things about their experiences. Please compare and judge for yourself if this could be from God.

In their own words:

I had a mighty power encounter with God. I’ve been intoxicated – completely drunk with the Holy Spirit. He’s a person, and he’s so wonderful. When I was baptized in the Holy Spirit some 20 years ago, it made Jesus real to me. This move has made the Holy Spirit and the Father’s heart real. It has completely turned us around as a church. It’s given us a real hunger for souls, a love for people…to show them the love of God.

Spiritual drunkenness seemed to be the predominant manifestation. After the invocation, “Come, Holy Spirit,” the receptive congregation began to stagger and sway. Loud, raucous laughter rolled over portions of the congregation, like a wave…People are stumbling and falling over each other by the dozens. Most are flat on their backs with a silly dazed grin on their faces or trying to get up and unable to…The ministry team is going around “swishing” the wave on people, getting intoxicated themselves…the young man from Ohio is telling me, “This is God,”…his eyes are bloodshot, he is swaying as he stands there, and he’s breathing heavily, just about to fall over!

When you feel intoxicated without taking any drug, while walking your steps fall majestically or like one drunk and you are unable to do any other work, and you like to remain mute and dislike speaking to or hearing others, and you feel like one drunk of Divinity, know that your Atma Shakti Kundalini, the power of Self, has come into action.

A general pagan teaching on the joys of spiritual drunkenness says:

Understanding that the term “drunkenness” has many meanings is a good foundation for comprehending the ecstatic ritual experience. One can be “drunk” with joy.

The leading Satanic priest, Alistair Crowley, who called himself The Great Beast and who prophesies from his “Lord Satan” (as he calls him), wrote:

Lord Satan saith: In rioting and drunkenness I rise again. You shall fulfil the lusts of the flesh.

I am of the snake that giveth Knowledge and Delight, and stir the hearts of men with drunkenness…I give unimaginable joys on Earth: certainty, not faith, while in life, upon death; peace unutterable, rest, ecstasy…

The following is from Crowley’s Book of the Law, where we find the love song of the serpent as he lures seekers ever more deeply into the occult:

I love you! I yearn to you! Pale or purple, veiled or voluptuous, I who am all pleasure and purple, and drunkenness of the innermost sense, desire you. Put on the wings, and arouse the coiled splendor within you: come unto me!

Clearly The Great Beast experienced raptures of love and joy, or he could not write like this. Note the description of “drunkenness of the innermost senses.” These descriptions may be extreme, but it is important to realize that even those who experience less extreme symptoms of spiritual intoxication are practicing the same form of spirituality. The difference is one of degree, not of kind. Whether you are a little bit drunk or a whole lot drunk depends only on how much you have taken. It is all poured from the same spiritual cup. And it is a dangerous up; Crowley went insane before he died.

The mystics of Islam are known as Sufis. As they describe their practices and experiences:

Ecstatic Sufis do not claim that they come to see what Muhammad saw…, but they move in his direction…Their states become trancelike because of their total abstraction from self…Sufis report that as their consciousness begins to change, it feels as if their wills were placed in abeyance and a superior will takes over. Sufis honor their ecstasies, but in calling them “drunken” they serve notice that they must bring the substance of  their visions back with them when they find themselves “sober” again.

Here we see trance states, submission to a greater power, spiritual drunkenness and visions while under the power of an intoxicating force. All of these things parallel Charismatic testimonies of their experiences while under the influence of the manifest spirit that they believe is the Holy Spirit.

Egyptian festivals feature a goddess of spiritual drunkenness with a very strange name, Hwt-Hrw. It is written:

Just twenty days after the New Year Festival the ceremony known as the Inebriation of Hwt-Hrw occurs…What end does this festival serve? In many ancient cultures, intoxication was seen as a means by which communication with, and awareness of, spiritual realities could be achieved…Inebriation also was achieved through the use of chanting, fasting, dance and music. In essence these were all seen as a means to create an altered state allowing one to become more open to the spiritual forces around them. The Goddess Hwt-Hrw’s title “Lady of Drunkenness” clearly reveals this aspect of Her nature. This “sacred drunkenness” or “sober drunkenness” can take on many forms…A [profound] intoxicating state of mind occurs when communing with the divine.

This pagan religion also teaches that spiritual drunkenness is how we commune with deity, and urges opening up to hidden, occult, spiritual forces. Occultists seek altered mental states in order to communicate with the supernatural.

Why spiritual drunkenness is not biblical

To seek “spiritual drunkenness” in order to commune with God under the influence of a manifest, supernatural spirit clearly fits all aspects of the definition.  It involves communing with God (as it is thought) beyond nature, reason and the mind. It is based on the belief that feelings of rapture and joy mean one has  found “the father’s heart.” It invites and allows the direct action of supernatural forces upon the human mind and spirit, with altered consciousness and the extreme results of mental numbness, loss of balance, etc.

But these forces are not of God. They are from Satan the serpent god, who masquerades as an angel of light, and from his demons.


In occultism, experience reigns supreme. But practitioners are not experiencing God. They are experiencing Satan or his spirits, for Satan is god of the occult. Staggering under his influence, deceived, they worship the serpent as God, praising and rejoicing. Spiritual drunkenness is an extreme form of spiritual adultery that involves the whole of the person: soul, spirit, emotions, mind and flesh. It is a complete giving over to Satan, the very enemy of the soul. It is drinking from the cup of demons.

Those who become involved in the occult will, as they progress along the path they have chosen, become increasingly blind to the true things of the Spirit of God. Their hearts will be hardened to the Word, and they will be increasingly incapable of understanding it. The Scriptures will become to them as a book shut and sealed. Their understanding will be darkened and darkened. The prophet Isaiah wrote:

Pause and wonder! Blind yourselves and be blind! They are drunk, but not with wine; They stagger, but not with intoxicating drink.  For the Lord has poured out on you The spirit of deep sleep, And has closed your eyes, namely, the prophets; And He has covered your heads, namely, the seers. The whole vision [revelation] has become to you like the words of a book that is sealed, which men deliver to one who is literate, saying, “Read this, please.” And he says, “I cannot, for it is sealed.”

Is spiritual drunkenness biblical? No, it is demonic, deceptive, and very dangerous.

All the above quotations are fully cited in the book True to His Ways: Purity & Safety in Christian Spiritual Practice, but are removed here for simplicity and to avoid links to occult or Charismatic websites.

Baruch House Publishing hereby grants permission to all readers to download, print, and distribute on paper or electronically any of its articles or articles provided each reprint bears our name (Baruch House Publishing), copyright notice, and Website address (www.baruchhousepublishing.com); and further provided all such reprints are distributed without charge. The articles and articles may not be issued or sold in book form, CD-ROM form, or microfiche.