So began John Rogers’ introduction to the Table of Principal Matters in the 1537 Matthew Bible. This Table was a concordance at the front of the book. It set out bible topics in alphabetical order. Under each topic were short headings with bible verses for further study.

This Principal Matters series follows the topics in the order of the Table and sets out the bible verses in full, taken from the Matthew Bible.

The topic of adultery in the Table of Principal Matters is long, and some of the scriptures given are also quite long. Therefore, this topic is divided into several parts.

There were some bible verses here that I was unable to identify due to typographical errors in the Matthew Bible.

(1) Adultery is a violation of the faith promised in marriage, which thing is forbidden to us.

Exodus 20:14 You shall not break wedlock.

Leviticus 18:20 You shall not lie with your neighbour’s wife, to defile yourself with her.

(2) Adulterers are stoned to death [under Mosaic law].

Leviticus 20:10 He who breaks wedlock with another man’s wife shall die for it, because he has broken wedlock with his neighbour’s wife; and so shall she likewise.

Deuteronomy 22:23-24 If a maiden is betrothed to a husband, and then a man finds her in the town and lies with her, then you shall bring them both out to the gates of the same town and shall stone them with stones to death: the damsel because she did not cry out, being in the town, and the man because he has violated his neighbor’s wife. And you shall put away the evil from you.

But if a man finds a betrothed damsel in the field and forces her and lies with her, then the man that lay with her shall die alone, and to the damsel you shall do no harm, because there is in the damsel no cause of death.

Cursed be he that lies with his father’s wife, because he has uncovered his father’s covering. And all the people shall say, Amen.

Cursed be he that lies with any manner of beast. And all the people shall say, Amen.

Cursed be he that lies with his sister, whether she be the daughter of his father or of his mother. And all the people shall say, Amen.

Cursed be he that lies with his mother-in-law. And all the people shall say, Amen.

(3) If the adulterers are not punished by men, God will punish them.

Jeremiah 5:7-10 Your children have forsaken me and sworn by them that are no gods. And although they were bound to me in marriage, yet they fell to adultery, and frequented harlots’ houses. In the desire of unclean lust they have become like the lusty horse, every man neighing at his neighbor’s wife. Should I not correct this? says the Lord. Should I not be avenged upon every people that is like this?

Jeremiah 7:8-10, 14-15  But take heed! You trust in counsels that beguile you and do you no good. For when you have stolen, murdered, committed adultery and perjury; when you have offered to Baal following strange and unknown gods, then you come and stand before me in this house that has my name given to it and say, Tush, we are quite absolved, though we have done all these abominations….

And therefore, even as I have done to Shiloh, so will I do to this house, to which my name is given and in which you put your trust – yea, to the place that I have given to you and your fathers. And I will thrust you out of my sight, as I have cast out all your brethren, the whole seed of Ephraim.

(4) An example of God’s punishment is David’s son, who died for the adultery of David.

2 Samuel 12:10-14  [Nathan said to King David,] The sword shall never depart from your house because (says the Lord) you have despised me and taken the wife of Uriah the Hittite to be your wife. Thus says the Lord: Behold, I will stir up evil against you, even from your own house, and will take your wives before your eyes and give them to your neighbor, who will sleep with them before the sun. And you did it secretly, yet I will do this thing before all Israel and in the open sunlight.

Then said David to Nathan, I have sinned against the Lord!

And Nathan said to David, The Lord has put away your sin; you shall not die. However, because in doing this deed you have given the enemies of the Lord cause to blaspheme, the child that is born of you shall surely die. 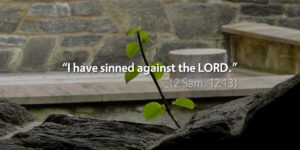 David confessed his sin and was forgiven, but the consequences for his sin were not remitted. For even forgiven sin is still punished in this life. David’s baby died for his father’s sin.

Susanna: The next heading under “Adultery” in the Table of Principal Matters deals with the story of Susanna. It reads, “Susanna would rather die than commit adultery.” “Susanna” is one of the apocryphal books. It is only one chapter long. Because it gives a very full picture of the sinful follies, lusts, and contrivances of man, and of all the sins that adultery draws along in its wake, I will devote the whole of the next post to Susanna’s story.

– Two preceding topics in this series are:
Adam
Accusation

Buy on Amazon in the UK

Buy on Amazon in Austrailia