The teaching of William Tyndale on Antichrist is scattered throughout his writings, but the most succinct was this passage from Parable of the Wicked Mammon:

Mark this also above all things – that Antichrist is not an outward thing, that is to say, a man that should suddenly appear with wonders, as our fathers talked of him. No, verily; for Antichrist is a spiritual thing. And is as much to say as Against-Christ; that is, one that preacheth false doctrine, contrary to Christ.

Antichrist was in the Old Testament, and fought with the prophets. He was also in the time of Christ and the apostles, as thou readest in the epistles of John, and of Paul to the Corinthians and Galatians, and other epistles. Antichrist is now, and shall, I doubt not, endure till the world’s end. But his nature is (when he is revealed and overcome with the word of God) to go out of play for a season, and to disguise himself, and then to come in again with a new name and new raiment. As thou seest how Christ rebuketh the scribes and the Pharisees in the gospel (who were very Antichrists), saying, “Woe be to you, Pharisees, for ye rob widows’ houses; ye pray long prayers under a colour; ye shut up the kingdom of heaven, and do not allow those who would to enter in; ye have taken away the key of knowledge; ye make men break God’s commandments with your traditions [precepts]; ye beguile the people with hypocrisy,” and such like. Which things all our prelates do, but have yet gotten themselves new names and other garments, and are otherwise disguised.

There is a difference in the names between a pope, a cardinal, a bishop, and so forth, and to say a scribe, a Pharisee, an elder and so forth; but the thing is all one. Even so now, when we have exposed him, he will change himself once more, and turn himself into an angel of light.[1]

Four points may be taken from the teaching of William Tyndale on Antichrist:

(1) Antichrist is a spiritual thing.

Antichrist is an evil spirit, the spirit of Satan, Christ’s adversary. Therefore, Antichrist is not a particular man, though he is personified in false teachers, and particularly in pre-eminent ones. Tyndale and other Reformers often referred to the pope as Antichrist, and in the quotation above, Tyndale called the Pharisees “very Antichrists.”

(2) Antichrist is now. The spirit works wherever and whenever he can through false teachers.

The work of Antichrist is always the same: to preach against the doctrine of Christ. In related writings, Tyndale elaborated that Antichrist suppresses the sacraments, and that he seeks authority and pre-eminence in the Church. He is also a persecutor. These are the things that Antichrist does.

It was obviously important in the teaching of William Tyndale on Antichrist to dispel the false idea that he was a future man. If we believe this, we will miss Antichrist now: we will be asleep, not watching, not even believing that he might presently be among us as a false teacher or prophet. Tyndale warned:

That Against-Christ or Antichrist that shall come is nothing but such false prophets as shall juggle with the Scripture and beguile the people with false interpretations, as all the false prophets, scribes, and Pharisees did in the Old Testament.[2]

John Rogers echoed William Tyndale on Antichrist in his note on 1 John 4 in the Matthew Bible:

Antichrist signifieth not any particular man, which (as the people dream) should come in the end of the world. For ye see that even in St. John’s time he was already come. But all who teach false doctrine contrary to the word of God are Antichrists.

(3) Antichrist goes out of play and then comes in again.

There are seasons when Antichrist has greater or lesser power. In his preface to the New Testament, Tyndale wrote that as it had gone under the Old Covenant, so would it go under the New: Antichrist would have seasons of power when the light of God’s word would be darkened. Before the Reformation, Antichrist had been entrenched in power in the Roman Catholic Church for a long time. Tyndale prophesied that after the Reformation, he would return. This brings us to the fourth point.

(4) Antichrist was bound to come on the heels of the Reformation in a new disguise.

Tyndale foresaw that after Antichrist had been exposed in the Roman Church and people had the Bible in their own languages, he would disguise himself with new names and garb, pose as an angel of light with appearances of righteousness, and begin again to darken the word and truth of God. This has occurred through various means. It has come to pass that the pure word has been almost destroyed in some of the worst modern Bibles, and many modern churches or denominations are completely apostate.[3] This is the very work of Antichrist, the false angel of light, who is gaining power as modern apostasy grows. Indeed, Antichrist is now revealed in this apostasy, for those who have eyes to see.

For a in-depth (10 pages) examination of Tyndale’s teaching about Antichrist and his translation of 2 Thessalonians 2, see Tyndale’s Doctrine of Antichrist. This paper compares Tyndale’s teaching with other views prominent today or in the past, including the Orthodox Church’s teaching, Puritan teaching from the 16th-17th century, and modern evangelical beliefs.

[3] Modern Bible versions, along with the history of translation of 2 Thessalonians 2 on Antichrist from the revisions in the Geneva Bible onward, are reviewed in chapter 23 of The Story of the Matthew Bible, Part 2, our new release. Here is a link to buy it on Amazon USA

William Tyndale did not write much about the New Testament book of Revelation, but he used imagery from it, including imagery of the beast and the “mark of the beast.”

Chapters 13-20 in Revelation contain prophecies about a beast, or beasts, who would have power over the nations and deceive them. The Greek word is therion, which means a savage, dangerous, or venomous animal (Strong 2342). Tyndale understood the dangerous beast(s) to represent false religion, and especially, at the time he wrote, the Roman Catholic Church. For centuries the Roman Church had been a powerful and savage persecutor, and it is widely accepted to be one of the beasts that the apostle John prophesied about in Revelation. John also referred to people who would take the “mark of the beast”:

If anyone worships the beast and his image, and receives his mark in his forehead or on his hand, the same shall drink of the wine of the wrath of God, which is poured in the cup of his wrath.

And the beast was taken, and with him that false prophet who worked miracles before him, by which he deceived them that received the mark of the beast, and them that worshipped his image. These both were cast into a pond of fire burning with brimstone.

Obviously, those who take the mark of the beast would have some close connection with the Roman Church (or other similar religious beast), and thus receive a mark or sign from that beast. What might that mark be? Tyndale often spoke of it as ordination into the ranks of the Roman Church; for example, as a priest or bishop, or taking vows to become a monk or friar in a monastic order.

In his book The Obedience of a Christian Man, describing the gross unlawfulness of the Roman Catholic Church, Tyndale wrote, 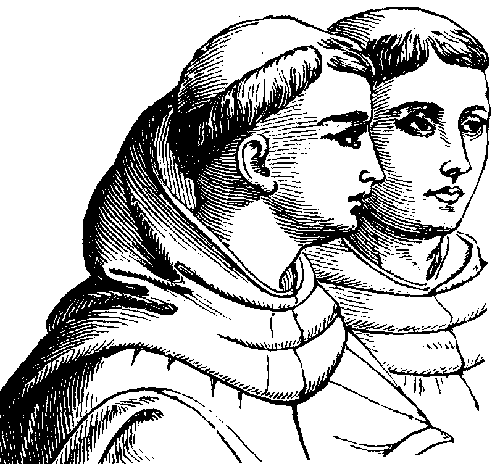 “For if any man will obey neither father nor mother, neither lord nor master, neither king nor prince, the same needs but only to take the mark of the beast, that is, to shave himself a monk, a friar or a priest, and is then immediately free and exempted from all service and obedience due to man” (p. 36). In this quotation, Tyndale was referring in part to the exemption that, historically, was granted to Roman Catholic clergy to exempt them from prosecution for criminal acts. The result of this was that some men sought ordination in the Church to escape prosecution for their crimes. To accept ordination into the apostate Church was, therefore, to take the mark of the beast of sin and unlawfulness. Ordination into the beast meant doing the beast’s work in whatever form that might take, including preaching false doctrine, persecuting the saints, etc. What Tyndale referred to as “shaving oneself a monk” meant to shave the top part of the head bald, as in the illustration, leaving a rim of hair around the skull. This was called a tonsure. Since shaving one’s head was a symbol of belonging to monastic orders in the Roman Church, this also was to take one of the beast’s marks.

Tyndale said of ministers or clergy, “If they minister their offices truly, it is a sign that Christ’s Spirit is in them, if not, that the devil is in them.” If they do not minister their offices truly, then they are “dreamers and natural beasts, without the seal of the Spirit of God, but sealed with the mark of the beast and with cankered consciences” (Obedience p. 110-11). Tyndale wrote:

Bishops and priests who preach not, or who preach anything save God’s word, are none of Christ’s nor of his anointing: but servants of the beast whose mark they bear, whose word they preach, whose law they maintain clean against God’s law. (Obedience p. 92)

Tyndale himself was ordained a priest in the Roman Catholic Church, though the beast defrocked him, imprisoned him, publicly strangled him, and burnt his body. But a faithless man who turns himself over to the doctrine and practices of the beast, not caring about truth, and who takes part in deceiving the people, and who does not repent, has taken the beast’s mark. There are many modern so-called Christian organizations that Tyndale might identify as beasts, which, though they have lost their power to persecute, still take people captive through deception and error. But there are also savage beasts in other religions today. 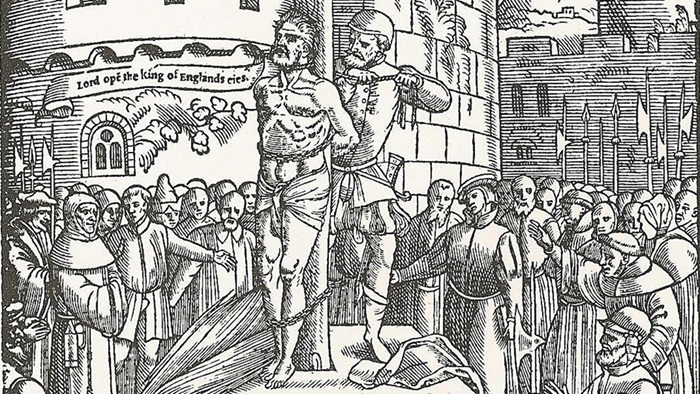 Tyndale strangled before being burned in Vilvoord, in 1536.

Men (or now, women) might accept ordination from the beast in ignorance, or even as part of their search for God. Lately I have been reading the book Far from Rome, Near to God, which is the testimony of 50 converted Catholic priests. It is fascinating to read about their struggles to find truth, which often remind me of Martin Luther’s quest for truth as he broke free, step-by-step, from the strongholds of Romanism. The priests all describe their time in monasteries, which indicates that things have not changed much: isolation, asceticism, intense indoctrination with Roman dogma, praying the rosary, self-flagellation, and complete obedience to the superior of the order characterized their duties. One former priest wrote, “My blind and rebellious wanderings took me through the dark and treacherous paths of Romanism, psychology, eastern religions, and new-age philosophy.” The Lord can and does rescue his children from many a beast – which, in the end, are all the different faces of the one who roams the earth seeking whom he can devour.

Does it not make sense that receiving the mark of the beast is joining with false religion, rather than receiving a microchip under the skin as many think today? Our eternal well-being depends on receiving the true knowledge of God and avoiding the doctrine and deception of the beast, but a microchip will be of no consequence in a thousand or a million years.

Quotations from The Obedience of a Christian Man are from the Penguin Classic edition, published 2000.