What were the “booths” that the Israelites were required to live in during the Feast of Tabernacles, as commanded in Leviticus 23? And what was the point of such a strange command?

In William Tyndale’s translation, as it was taken into the 1537 Matthew Bible, Leviticus 23 reads as follows (gently updated):

33And the Lord spoke to Moses saying, 34Speak to the children of Israel and say: The fifteenth day of the same seventh month shall be the Feast of Tabernacles, seven days unto the Lord. …

39Moreover, in the fifteenth day of the seventh month, after you have gathered in the fruits of the land, you shall keep holy day unto the Lord seven days long. The first day shall be a day of rest, and the eighth day shall be a day of rest. 40And you shall take for yourselves the first day, the fruits of goodly trees, and the branches of palm trees, and the boughs of thick trees, and willows of the brook, and shall rejoice before the Lord seven days. 41And you shall keep it holy day unto the Lord seven days in the year. And it shall be a law forever unto your children after you, that you keep that feast in the seventh month. 42And you shall dwell in booths seven days: all that are Israelites born, shall dwell in booths, 43that your children after you may know how that I made the children of Israel dwell in booths, when I brought them out of the land of Egypt: for I am the Lord your God.

A clue to understanding this passage lies in the former meanings of two words: “booth” and “tabernacle.”

The meaning of the word “booth”

According to the Oxford English Dictionary (OED), from the 13th century until Tyndale translated the books of Moses, the primary meaning of the word “booth” was

A temporary dwelling covered with boughs of trees or other slight materials.[1]

We may be 100% certain that this was how William Tyndale used the word, because in a table of definitions appended to his 1530 Pentateuch he wrote that “booth” meant “a house made of boughs.”[2]

The meaning of the word “tabernacle”

Interestingly, the word “tabernacle” also once meant, not only a tent, but also a temporary dwelling made of branches or boughs.[3] Understanding this, the Leviticus passage most naturally indicates that the Israelites were required to gather branches, boughs, and willows (v40), and proceed to make booths of them to dwell in for seven days (v42.) The seven days of living in these booths was meant to be a time of rejoicing and enjoying the fruits of the trees (v40), as well as an occasion to remember and show how the Israelites lived in temporary shelters after they first departed from Egypt (v43).

The booths of the Israelites: branches, boughs, and willows from the brook

One of the quotations given under the OED definition of “booth” speaks of “temporary booths, made of intertwisted palm, olive…and willows from the brook.” This sounds very much like the booths that the Israelites were required to construct and dwell in while they celebrated the Feast of Tabernacles.

But some commentators distinguish the branches, boughs, and willows referred to in verse 40 from the materials that the Israelites were to use for building their booths. They say that the boughs and branches were to be taken into the temple and waved before the Lord. Bible commentator Matthew Henry observes that this is how the Jews interpreted the passage. However, he suggests these verses may refer to using branches and boughs both in praise and worship and for the construction of booths. In the context, this makes good sense. Henry wrote,

The Jews make the taking of the branches to be a distinct ceremony from the making of the booths. It is said, indeed (Nehemiah 8:15), that they made their booths of the branches of trees, which they might do, and yet use that further expression of joy, the carrying of palm branches in their hands, which appears to have been a token of triumph upon other occasions (John 12:13 ), and is alluded to, Revelation 7:9. The eighth day some make a distinct feast of itself, but it is called (John 7:37) that great day of the feast; It was the day on which they returned from their booths to settle again in their own houses. They were to rejoice before the Lord during all the time of the feast. (Emphasis original)[4]

In any event, the Israelite people were certainly required to gather boughs and branches together to make their booths, in which they were to live and sleep and rejoice for seven whole days. Thus the Feast of Tabernacles might also be called, in a paraphrase, the Feast of Houses Made with Boughs. Sometimes it is called the Feast of Booths. 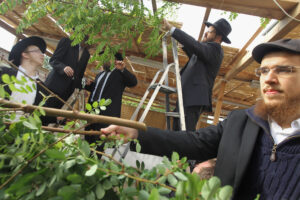 Modern-day Jews build a booth for the Feast of Tabernacles, or Succoth as they often call it.

Interested in other words used in the Bible? One of the most important — because the whole New Testament revolves around it — is the word “sin” in such phrases as “Christ was made sin for us.” This was a Hebrew idiom, and it meant that Christ was made a sin offering for us. William Tyndale taught this in notes in his New Testament. In the Matthew Bible, John Rogers used the same notes. See our blog post on this important topic here

[1] Oxford English Dictionary online (OED), sv booth, noun. Entry 1.a. This meaning of “booth” continued to be current for another 300 years or so, after which time it fell out of use.

[3] OED, sv.tabernacle, noun. Entry 1.a. It also meant a tent, which is how we usually understand it in biblical context.

KW  Israelites required to live in booths for seven days