John Rogers’ note on Genesis 12:5 helps the reader understand who the “souls” were that made up the convoy of Abraham’s household when he left Haran with Sarah and Lot, in the time that they set out for Canaan. However, Rogers’ understanding, which is also that of the Wycliffe, Coverdale, and Great Bibles, has been changed since revisions made in the Geneva Bible. 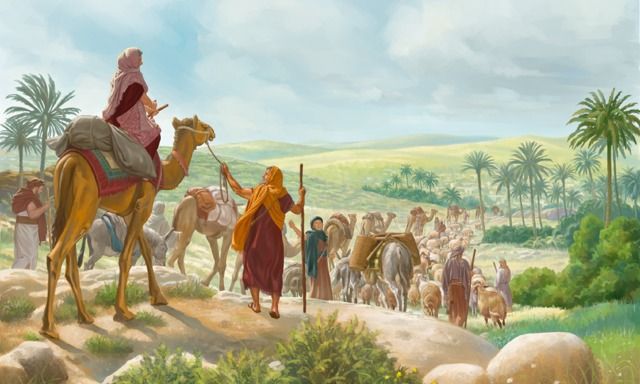 Genesis 12:5 in the Matthew Bible, which is William Tyndale’s translation, says:

And Abram took Sarai his wife and Lot his brother’s son, with all their goods which they had gotten, and souls which they had begotten in Haran. And they departed to go into the land of Canaan.

I always understood these “begotten souls” to be people born in Abram’s (i.e. Abraham’s) household; that is, his servants, herdsmen, shepherds, etc. They grew, married, and bore their own children, thus steadily increasing the size of his house.

Three other early English Bibles read like the Matthew Bible:

Wycliffe 1380: And he took Sarai his wife, and Lot, the son of his brother, and all the substance which they had in possession, and the men which they had begotten in Haran.

Coverdale 1535: So Abram took Sarai his wife, and Lot his brother’s son, with all their goods which they had gotten, and souls which they begat in Haran, and departed.

Great Bible 1540: And Abram took Sarai his wife and Lot his brother’s son, and all their substance that they had in possession, and the souls that they had begotten in Haran.

Wycliffe’s translation most clearly shows that the “souls” were people in Abraham’s house (‘men’ = ‘people’ generally in Old English). Rogers agreed with Wycliffe and clarified in a note:

MB note on Genesis 12:5: Souls here are taken for his servants and maidens, who were very many, as you may see in Genesis 14:14.

And what about Genesis 14:14? It describes how Abraham rescued Lot from the heathen kings, and confirms that his servants were indeed born in – that is, begotten in – his house:

When Abram heard that his brother was taken, he harnessed [armed] his servants born in his own house, three hundred and eighteen, and followed till they came at Dan.

Of course, the servants that Abraham armed for battle would have been males. Three hundred and eighteen is a lot of them. Many would have had their own wives and children, thus making Abraham’s household very great indeed.

This, then, was the understanding of the Lollard and Reformation Bibles. But with the 1560 Geneva Bible, the translation and the commentary were changed – not greatly, but nonetheless they did bring a different message.

The Geneva Bible was the work of early Puritans in Geneva. Under the oversight of John Calvin they took and greatly revised William Tyndale’s New Testament as well as the Old Testament of the Great Bible. Below we see what they did at Genesis 12:5. Their revision was introduced in the 1560 edition and retained in 1599. Note, in Early Modern English the term “cattle” meant all livestock and beasts of pasture, including oxen, camels, sheep, and goats:

Genesis 12:5, GNV: Then Abram took Sarai his wife, and Lot his brother’s son, and all their substance that they possessed, and the *souls that they had gotten in Haran, and they departed, to go to the land of Canaan.

The Geneva version changed the meaning from souls born in Abram’s household – a natural increase – to souls acquired by him. This suggests buying and selling. That this did occur at times is certain: the buying of servants is referred to in Genesis 17. So I do not and cannot say that it is wrong. But the emphasis is different. Further, the identity of the “souls” was changed to include oxen, camels, and goats along with the servants, which somewhat demeans the servants.

Some might point to the fact that the Hebrew usually translated “beget” in the Old Testament (yaw-lad) is a different word than was used in Genesis 12:5 (aw-saw). They will point to the narrow definition of aw-saw in Strong’s However, Hebrew scholar Gesenius, though he does not acknowledge the strict sense “beget,” says aw-saw can mean that which is produced by the body. In any case, both Strong and Gesenius were among the higher critics who rejected several traditional doctrines and teachings of Christianity, and they are not always reliable (see my paper What Happened to Hell?). Further, I have many times observed that William Tyndale’s insight into the polysemy (many meanings) of ancient Hebrew and Greek words was superior to those of later scholars. If he were here, I know he could defend his translation.Therefore, while “gotten” is no doubt a defensible translation (the KJV also has it), so is “begotten.” Further, “begotten” is consistent with Genesis 14:14.

Lastly, it is true that “begotten” formerly had the sense “acquired” or “gotten.” However, this was obviously not how Rogers understood it, since he explained in his note that it referred to servants “born in” the household, as stated in Genesis 14:14.

Therefore, in good conscience I will maintain the original translation and commentary in the New Matthew Bible, to the effect that the “souls” of Genesis 12:5 were human beings, and that they were truly “begotten” in Haran.

No modern Bible that I have seen has recovered the understanding of the Reformation Bibles in this verse. A sampling:

NIV: He took his wife Sarai, his nephew Lot, all the possessions they had accumulated and the people they had acquired in Harran, and they set out for the land of Canaan. (ESV and HSBC similar.)

CEV: Abram was seventy-five years old when the Lord told him to leave the city of Haran. He obeyed and left with his wife Sarai, his nephew Lot, and all the possessions and slaves they had gotten while in Haran.

TLB: He took his wife Sarai, his nephew Lot, and all his wealth – the cattle and slaves he had gotten in Haran – and finally arrived in Canaan.

Therefore, it appears that the New Matthew Bible will be alone among modern Bibles in keeping the distinction between possessions gotten and souls begotten in this verse:

NMB: And Abram took Sarai his wife and Lot his brother’s son, with all their goods that they had gotten, and *souls that they had begotten in Haran. And they departed to go into the land of Canaan.

NMB note: *Here souls are taken for his servants and maidens, who were very many, as you may see in Genesis 14:14.