Researched and prepared by Ruth Magnusson Davis
Topic theme: Abstinence from sin and defilement is wisdom and health.

(1) To get to know the Table of Principal Matters in the Matthew Bible.
(2) To learn through Bible studies from the Reformation.

“As the bees diligently do gather together sweet flowers, to make by natural craft the sweet honey, so have I done with the principal topics contained in the Bible.” So began John Rogers’ introduction to the Table of Principal Matters in the 1537 Matthew Bible. The Table was a concordance at the front of the book, which set out Bible topics in alphabetical order. Under each topic were statements of doctrine and Bible verses for study.

(1) The abstinence of a Christian is to withdraw himself from sin.

Tobit 1:10-11 When [Tobit] with his wife, his son, and with all his kindred came captive to Ninevah, when the people all ate of the foods of the heathen, he kept his soul, and was never defiled by their foods.

1 Thessalonians 4:3-6  For this is even the will of God: that you should be holy; that you should abstain from fornication; that every one of you should know how to keep his vessel in holiness and honour,  and not in the passion of lust, as do the heathen who do not know God; that no one should go too far and defraud his brother in bargaining.

1 Peter 2:1 Therefore lay aside all vice, and all guile and dissimulation and envy, and all backbiting.

(2) To them that keep abstinence, wisdom is given:

Daniel 1:8,16-17 Daniel was at a point with himself that he did not want to be defiled through the king’s food, nor the wine that he drank. And this he requested of the chief chamberlain [Melassar], lest he should defile himself…. Thus Melassar took away their food and wine, and gave them potage instead. God gave now these four young men skill and knowledge in all scripture, and wisdom; but to Daniel especially, he gave understanding of all visions and dreams.

And also bodily health is given:

Ecclesiasticus 37:27-31 My son, prove your soul in your life. And if you see any evil thing, do not give it to her. For all things are not profitable for all men, neither does every soul have pleasure in everything. Be not greedy in eating, and be not too hasty upon all foods. For excess of foods brings sickness, and gluttony comes at the last to an unmeasurable heat. Through gluttony have many a one perished, but he who eats temperately prolongs his life.

(3) There is an example of abstinence in John the Baptist:

Matthew 3:4 This John had his garment of camel’s hair, and a girdle of skin about his loins. His food was locusts and wild honey.

Luke 1:15 He will be great in the sight of the Lord, and shall drink neither wine nor strong drink. And he will be filled with the Holy Spirit, even in his mother’s womb. 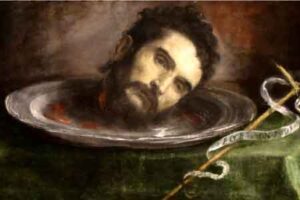 The gruesome death of John the Baptist. The world and its rulers hate those who rebuke them of their sin.

– Information about the New Matthew Bible Project is here.

– Sample scriptures from the New Matthew Bible are here.

– Previous topics in this series are:
Abomination
Abrogation